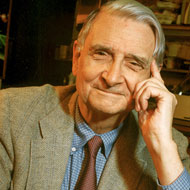 “Oh, what a wonderful idea!”

Dr. Edward O. Wilson appeared at The Progressive Forum in September 2006 at the Wortham, the first year of an unlikely lecture series I started. I had created a motto that rang true for me, but the manager of another Houston series called me “wayward.” My motto focused on the series theme: “Great Minds, Great Answers” which I defined as the people who created new fields of understanding, advancing the success of the individual, our species, and life on the planet – the Charles Darwins, the Sigmund Freuds, and … the Edward O. Wilsons of the world.

Dr. Wilson was a hero who provided me a worldview that made ultimate good sense. In my learning steps creating an opening season of The Progress Forum, I connected with his agent, business-like.  But as Dr. Wilson was about to actualize in my life, close to the nervous day meeting him at the airport, it felt fluky surreal. He happened to be promoting a book, The Creation: An Appeal to Save Life on Earth, toward convening society’s two most powerful groups together – religion and science.

I wondered, what’s a great mind like? This was E.O. Wilson – the Charles Darwin of our time – what would he say? What would I say?

Days before the event, inclined in aimless mulling in my office chair, I was astounded answering my phone, “This is Ed Wilson, thanks for having me in Houston.”

I jumped from my chair and rambled the office floor, “Mr. Wilson, we’re so excited. Thanks for calling.” I missed his doctor title.

Soft-voiced, “What’s your audio-visual setup; I have slides to present?”

“Mr. Wilson, I didn’t hear about that from your agent. But I’ll certainly set that up for you.”

“Well, I’m glad I called. And what’s the program format like?”

“We’re in the Houston opera house, we’re opening with a rendition of Joseph Hayden’s The Creation. I hired a student singer and pianist from Houston Grand Opera’s training studio.

“Oh, what a wonderful idea!”

I remember where I was standing, against a cabinet, absorbing the blessing from the Great Man – the moment I started growing a new life, richer and deeper, the same experience many of Wilson’s colleagues and friends shared after his death at 92 in late December.

Edward O. Wilson founded several fields of science that are among the most important for humanity’s success as a species. Beginning as a curious boy turning over logs and finding ant nests in his native rural Alabama, his insights laid the founding principles of conservation biology. One of his masterpieces, Sociobiology, explained human nature – how our emotionality is rooted in the natural world, expanding objective science to subjective reality. Wilson identified human instincts as products of natural selection, pioneering the field of evolutionary psychology. In the last part of his life, he led the way in saving the natural world from human recklessness with ardent advocacy and books such as Half-Earth, Biophilia, and The Future of Life. He won two Pulitzer Prizes, the first for On Human Nature explaining our behavior biology, the second for The Ants where he hoped a work of fiction would reach even larger audiences.

What did I notice in my two days with Ed (as he wished me to call him)? First, he was the only speaker to call me in advance. Great discoverers are involved supervisors and compassionate team builders – and this one loved a big show, story, and song – for messaging that comes alive! He often described himself as a natural story teller because he was Southern.

At the airport, in the moment we joined in the backseat of our Lincoln Town Car, I realized this man of wisdom had no energy for pretense. He was all curiosity – for The Progressive Forum … and for me. “What led you to start this?” he asked.

“I worried we were losing the republic. I hope we can make a difference using the internet,” I ventured. I saw a man who was listening.

People ask me which Progressive Forum speakers have been the primadonnas. None. If there’s a consistent quality of the great minds I’ve met, it’s a natural sense of self. These great discoverers aren’t distracting their open minds with narcissism and self-absorption.

Ed’s gentle grin and untidy hair drew me in, like he was fresh off a country walk. I wondered how this worldly icon of 77 could appear awestruck riding into downtown Houston. I thought of a mind endlessly refreshing itself, remembering how he wrote about himself: “Someone who never got over my bug period.”

Turning down Prairie Street with the Wortham in sight, our backseat world got euphoric – we were kids getting high on insights.

Out of the blue, for no discernable reason, Ed declared, “Some bishops pulled a power play selecting New Testament writers to reinforce Jesus as God.” I wondered why he was saying this. Had I signaled my similar beliefs?

I could feedback on this, “Yeah, that’s why people attend The Progressive Forum! Tribal instincts drawing like-minded people together for strength. We’re a genetically driven progressive tribe!”

Ed’s enthusiasm was making me bigger.  He explained how my own book idea was important, why it would relate.

After his Wortham presentation, he signed books for fans in the grand foyer. I handed him my copy and wondered why he was taking so long to sign it. He turned with a beam and showed me a picture of an ant he had scratched out with a caption in Latin, as if he had just named a new species. He read out loud, “For Randall, Texas Wise Man.”

The next morning at the airport, we hugged in the departure area. He walked, turned back square, and waved full bodied: “Good luck with The Progressive Forum!”

I’m thinking agnostics like Wilson are the most loving, making the here and now matter.

We corresponded by regular mail for about a year.

From his obituaries, I learned his father was an alcoholic who committed suicide – perhaps our inner-childs connected at some unconscious level with that in common. I was certainly getting some fathering –strength for my new “wayward” mission and path of self-discovery.

In this reflection, I’m struck by how much I’m still discovering from our brief path-crossing – with the man who wrote, “There’s no better high than discovery.”

And … “You are more capable than you know.”