An Optimistic View: How DO We Heal the Soul of America?

How did we get to a place where 47% of the electorate voted to re-elect a president after four years of official cruelty, separating children from parents, ignoring a deadly pandemic, and nearly destroying American democracy?

That 73 million people voted for Trump is irrational by any measure. How do we understand this?

As President-elect Biden says, stopping the vitriol is essential. But there are more fundamental answers in the fields of economics, therapeutic psychology, and even genetics.

Extreme inequality drives extreme irrationality. As more working-class Americans were left behind, their fear and desperation drove them toward the more extreme presidential candidates in the last few years – Donald Trump and Bernie Sanders.

During the last 40 years, earnings of the bottom 90% of Americans barely rose while the top 1% more than doubled theirs, and 40% of Americans can’t meet an unexpected expense of $400.

Acclaimed economist Robert Reich writes in his most recent book, The System: Who Rigged It, How We Fix It, “The most powerful force in American politics today is anti-establishment fury at a rigged system. There are no longer moderates. There’s either authoritarian populism (Trump) or democratic populism (represented in Bernie’s 2016 ‘political revolution.’)” You can see more on this concept in my recent livestream interview with Robert Reich at The Progressive Forum.

Fear drives voting irrationality. This was the case when desperate German and Italian people elected Hitler and Mussolini.

Genetic factors trigger irrational tribalism. The eminent biologist Edward O. Wilson in his book, On Human Nature, focused on our genetic heritage, our psychology based on millions of years of evolution with tribalism, a key animating force in modern society, especially when triggered by fear and existential threat. The fearful tribe rallies around a “strongman” who regales “origin myths” about the superiority of “our tribe” versus our enemy. The home tribe “objectifies the other” by eliminating empathy to be able to kill the other. Yes, it’s baffling how almost half the electorate could vote to re-elect a criminal president in 2020, but we can begin to make sense of it when factoring the science of evolutionary psychology, how existential fears trigger our deepest instincts of tribalism and drive the fury of grievance politics. You can see Edward O. Wilson’s 2006 presentation at The Progressive Forum here. 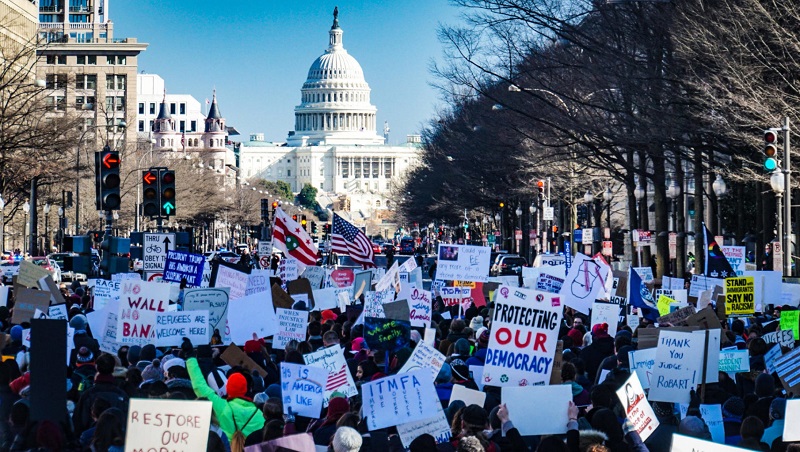 President-elect Biden is right: “Americans just want a fair shot!” Working-class Americans know the system is rigged against them, and it’s heartening to see Biden’s bold plans to rebalance fairness in America by packaging a $2 trillion climate investment as a high-paying jobs plan. America will reduce polarization as it reduces unfairness. America will heal as earnings are more widely shared. What nation sets a good example? The America of the ’50s, ’60s, and ’70s, when prosperity was shared in a broader way, when the healing of civil rights gained footing.

Today, the usually pessimistic Nobel laureate Paul Krugman, in his New York Times column, was hopeful about a "Biden Boom” after the pandemic, which means that America may have a timely opportunity to grow a more inclusive economy. He sees a quicker recovery compared to the slump after the 2008 crash, writing that today's households have “much lower debt … and there’s … a lot of pent-up demand.” He suggests that Democrats could continue their dominance through the 2022 midterms “as the party that brought the nation and the economy back from the depths of the Covid despond.” Again, a timely opportunity for reviving the working-class and reducing polarization over the longer term.

Here in Houston, we have special opportunities to lift our working-class citizens in a green economic transition, with our deep human capital in energy. Led by think tank Center for Houston’s Future, part of the Greater Houston Partnership, our business leaders are getting serious about a transition to a low-carbon future after Hurricane Harvey. Jobs in renewable energy average $46 an hour, which is more than $88,000 a year. Renewables are booming worldwide. This week, the International Energy Agency reported that 90% of new electrical generation in 2020 will be renewable. And in only five years, IEA projected that “renewables are set to become the largest source of electricity generation worldwide.” For more on opportunities in recovery, see my essay, Houston Beyond Fossil Fuels, on The Progressive Forum blog.

Harris County went for Biden by massive proportions, 911,000 to 699,000 over Trump. There’s more political space for our leaders to up their nerve and look at progressive places like Austin for bold ideas and models. My tip of the hat goes to Lina Hidalgo who invested $30 million to facilitate voter access, among her first acts as a newly elected county judge, a moment when that need wasn’t widely apparent. The result was record turnout that transformed Harris County into a growing political powerhouse. To fight climate change, we’ll need strong leaders with this kind of courage to do the hard things, yet-to-be imagined.

Climate Is on the Line

For me, election night was like a near-death experience. On the line was our democracy, climate, and the future of life. We still have to get through a noisy two-month transition, and we may end up with a divided government. We need two Senate wins in Georgia to form a united government to begin to tackle climate in meaningful ways. That’s just “to begin” to tackle it! But with a Senate with a 60-vote minimum to overcome a filibuster, Biden’s climate initiatives may still be left to weaker means such as slipping climate measures into infrastructure and coronavirus rescue bills, an anemic approach for an existential crisis.

I’m hopeful from recent breakthroughs in business and technology to solve the climate crisis. Think tanks BloombergNEF and Carbon Tracker recently reported that renewables are now the low-cost baseload for two-thirds of the world. But while acknowledging the exciting speed of business, the climate crisis is an emergency. We must move faster than the speed of business, we must mobilize low-carbon assets at the speed of emergency, like the way we’re mobilizing at the rate of emergency to develop a coronavirus vaccine, leaving business-as-usual behind.

I began to heal in the last few years when I got perspective on Narcissistic Personality Disorder, having been raised in a family with this toxic emotional pattern. Today, my radar of doubt rings clear when I’m around a pathological narcissist. As a nation, we must understand clearly the pathological narcissism of Trump over the past four years. Social scientists say one of the worst toxicities of classic NPD is the way the narcissist changes the reality, week to week, day to day, with lying and blame. Under Trump, we’ve been constantly astonished with this behavior, and rightly so – it’s a serious disorder. The pathology is driven by a desperate need to avoid their own emptiness by creating new realities that induce “narcissistic supply” from others. While they change reality to keep us off balance, they issue grievance with blame to maintain superiority, especially in public. It’s exhausting! It’s time for the media to feature qualified psychiatrists to help the public understand NPD. Oprah isn’t enough, and neither are aggrieved Trump family members.

Reckoning With Collective Trauma as a Nation

We’ve experienced collective trauma as a nation. We need to reckon with it, we need to talk. Otherwise, if our leadership shrugs and sweeps the past four years under the rug, we’re likely to repeat it, as we do in our personal lives when we ignore emotional issues. Pulitzer Prize winner and MacArthur genius Jared Diamond, in his latest book, Upheaval: Turning Points for Nations in Crisis, cites examples where countries resolved national trauma by using the processes of resolving personal trauma. Diamond writes that “a sense of crisis is widespread in the U.S. today….” Like individuals, a nation can begin “a slow process of grieving, reappraising their values, rebuilding their lives, and discovering that not everything in their world was ruined.” See Jared Diamond’s appearance on the subject at The Progressive Forum here.

Racist Republican Trumpism should prove unsustainable in the long term, indicated by the widespread national outrage after the death of George Floyd, which ignited a Black Lives Matter movement criss-crossing classes, gender, and identity groups, awakening new levels of voter activism to pull our democracy back from the brink. In 2020, turnout and voter activism rose to record levels even while overcoming Jim Crow voter suppression. U.S. turnout among registered voters was 55% in 2016, but it’s projected to jump above 66% for 2020 according to The Washington Post, a dramatic increase of 20%. This approaches levels of turnout in countries that have experienced the collective trauma of dictatorships. For example, Italy and Germany turnout was 63% and 76% respectively in 2017 according to Pew Research Center.

Opportunities for the Republican Party to Moderate

Republicans have lost the popular vote in seven of the last eight presidential elections, the electorate is diversifying, and voter activism is on the rise. Republican voter suppression has outgrown its usefulness. Mainstream Republican leaders have an opportunity to call out the failing path of doubling-down on voter suppression. This isn’t fantasy. Not long ago, this was the strategy of the Republican National Committee after Mitt Romney lost the 2012 election. The RNC Election-Autopsy Report the next year is replete with recommendations to move to a moderate, more inclusive path, saying, “Minority communities … view the Party as unwelcoming…. If the Party doesn’t modernize … its appeal will continue to shrink to its core constituencies only.” Tragically, Trump’s rise in 2016 took the Republican party further down the path of toxic minority rule the RNC report warned of.

However, in this presidential election of 2020, the moderate Republican group Lincoln Project rose to prominence to fight Trumpism and “protect democracy,” becoming well-funded and widely supported. It has the resources and leadership to become a viable centrist pathfinder. A healthier Republican Party will mean a more effective Democratic Party.

The first step is to distance ourselves from the hysteria – the first move in dealing with NPD – and focus on positive steps. President-elect Biden is a Zen master at ignoring the noise, the gift of years, the gift of a wise tribal elder. Breaking up with an aggrieved narcissist is often painful and lengthy. But healing is a real prospect. While “Healing the Soul of America” is a somewhat vague phrase, the means to heal are real, practical, and readily at hand. We’ve got a fair shot.