Paid ticket holders at the event will receive a free copy of his book, a retail value of $17.99. The book partner is Blue Willow Bookshop.

“When courage and conscience are so missing in American leadership, Col. Vindman’s appearance will inspire, reminding us what patriotism looks like,” said Progressive Forum founder, Randall Morton.

The event is sponsored by the Beverly M. Manne Trust. The trustee is high-profile attorney Neal Manne, former managing partner of Susman Godfrey.  Manne said, “I’m delighted to honor my mother this way, who, like Col. Vindman, was a child of Eastern European Jewish immigrants and lived a vibrant civic life.” 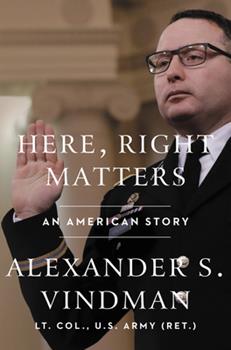 Vindman’s book is a stirring account of his immigrant childhood growing up in Brooklyn, a sterling military career defending his new homeland on the battlefield, and rising to serve in the White House, where he reported President Trump’s extortionist call to Ukraine President Zelensky, asking him to investigate Vice President Biden and his son Hunter, despite intense pressure to stay silent.

Vindman was born in the Ukrainian Soviet Socialist Republic. After the death of his mother, his father fled the Soviet Union with 3-year-old Alex and his two brothers, bringing them to New York, starting a new life from scratch. In his testimony before Congress, which led to Trump’s impeachment, Vindman opened his statement thanking his father, saying, “In Russia, my act of offering public testimony involving the President would surely cost me my life. I am grateful for my father’s brave act of hope … for the privilege of being an American citizen and public servant.”

Vindman is a retired U.S. Army Lieutenant Colonel. Most recently he was the director for Eastern Europe, the Caucasus, and Russia on the White House National Security Council. He served in South Korea, where he led infantry and anti-armor platoons. He is a combat veteran of the Iraq War, where he sustained an injury from a roadside bomb and earned a Purple Heart.

Before the White House, he served the Joint Chiefs of Staff as the Political-Military Affairs Officer for Russia, as well as a military attache at the U.S. Embassies in Moscow and Kiev. While on the Joint Staff, he co-authored the National Military Strategy Russia Annex and was the principal author for the Global Campaign for Russia. He is currently a doctoral student and senior fellow for the Foreign Policy Institute at the Johns Hopkins School of Advanced International Studies. He’s also a Pritzker Military Fellow at the Lawfare Institute, executive board member for the Renew Democracy Initiative, and senior advisor for VoteVets.