SHORT. Great news: opportunities for individuals to take control of their own lives. 2:50 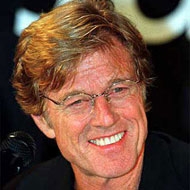 In addition to his work as an actor, director, and producer, Robert Redford has been a leading environmentalist and activist since the early 1970s, and has served for over 30 years as a Trustee of the Natural Resources Defense Council. In the early 1980s, Redford founded the Institute For Resource Management (IRM), which he led throughout the decade, bringing together environmentalists and industrialists to resolve conflicts and promote sustainable development. Robert Redford has received numerous awards for his environmental work including the 1989 Audubon Medal Award, the 1987 United Nations Global 500 Award, the 1993 Earth Day International Award, and the 1994 Nature Conservancy Award. Redford landed his first Broadway starring role in Sunday in New York. In 1969, Redford and Paul Newman teamed to star in the Western, Butch Cassidy and the Sundance Kid. The film became an instant classic and firmly established Redford as one of the industry’s top leading men. He won an Academy Award for Best Director for Ordinary People. Redford founded the Sundance Institute in 1981, which was dedicated to supporting emerging screenwriters and directors and independent cinema.

Fighting Goliath is the story of an unlikely collaboration of 38 Texas cities and school boards banding together to oppose 18 new coal plants. The effort was successful and presents a new model for coalitions of people of different values, in this case ranchers and business leaders joining with environmental and community groups. The film examines the dangerous impacts of conventional coal plants and the power of community action. Fighting Goliath was commissioned by The Redford Center and co-produced by Alpheus Media in Austin.

Thanks to event sponsors:
Shell Oil Company
Susman Godfrey
Thanks to videographer:
Gotham Image Works
For citing this website as a source: ProgressiveForumHouston.org
Thanks to Robert Redford for permission to post the entire event video on our website which we've edited into segments. We welcome visitors to share this exciting educational material. However to ensure appropriate context, our video segments can only be viewed on this page. The convenient share buttons will enable you to share this entire page.