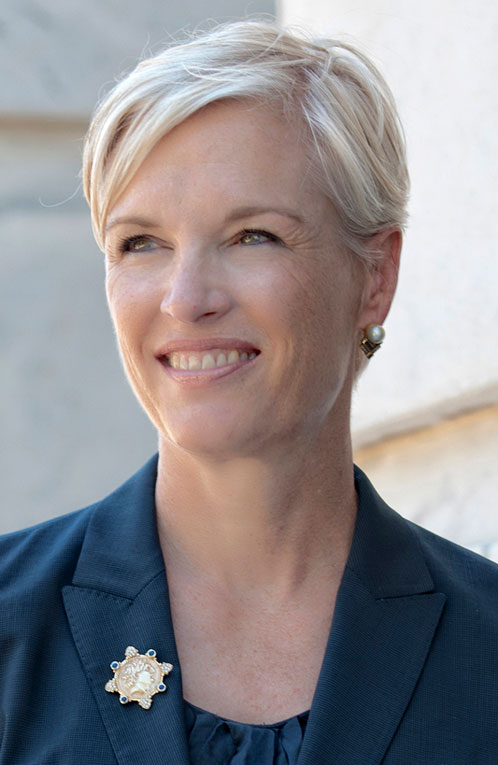 The President of Planned Parenthood Federation of America, Cecile Richards, will be at The Progressive Forum on January 27, 2014, at the Wortham Center, Cullen Theater at 7:30.

Tickets range from $19 to $79. Tickets are available at ProgressiveForumHouston.org or by calling 832-251-0706. There is no physical box office except at the theater on event night.

Before joining Planned Parenthood, Richards served as deputy chief of staff for Nancy Pelosi. In 2004, she founded and served as president of the grassroots organization America Votes, a coalition of organizations working to maximize registration, education, and voter participation. She began her career organizing low-wage workers throughout California, Louisiana, and Texas. She is the daughter of Ann Richards, the 45th governor of the state of Texas.

In the summer of 2013, Cecile Richards joined the rallies at the Texas capitol to stand with state senator Wendy Davis and protest the restrictive abortion legislation Senate Bill 5 (SB5). After Senator Davis’ filibuster, it was Richards who announced the bill’s defeat to the protesters and led the crowd in a rendition of “The Eyes of Texas” in the capitol rotunda.

However, in the special session a few days later, the Texas legislature passed House Bill 2 (HB2), which imposed medically unnecessary, excessive facility codes on abortion locations, including codes for facilities that provide non-surgical abortion with oral medication. Around the country these excessive facility codes have been called TRAP provisions (Targeted Restrictions of Abortion Providers). The measure forces dozens of qualified facilities to rebuild or shutter.

In addition, HB2 requires doctors who provide abortions to gain admitting privileges at local hospitals less than 30 miles from the abortion location. According to a study by the University of Texas called the Texas Policy Evaluation Project, the admitting privilege restriction would completely eliminate access to safe and legal abortion in vast, sparsely populated stretches of Texas, which include cities such as Forth Worth, Harlingen, Lubbock, Waco, McAllen, and Killeen.

For non-surgical abortions, HB2 requires a pill combination according to an outdated and inferior protocol, forcing women to return to the facility repeatedly, possibly up to four visits to receive a sonogram, two drug doses, and a follow-up visit. The outmoded protocol of HB2 was approved by the FDA in 2000. Since then, the medical community has improved protocols with

lower doses that have proven safe and effective through nine weeks of pregnancy. The legislation now bans the medication (called RU-486) after 49 days instead of the medical consensus of 63 days. According to the UT study, thousands of women seeking abortion would have to drive more than 100 miles to return to the facility. The study said that currently, with the more convenient protocol, women are provided both doses in the same office visit, taking the second dose at home a day or two later.

HB2 also imposes an unconstitutional ban on abortion at 20 weeks. Legal experts say such a ban is in conflict with the U.S. Supreme Court decision Roe v. Wade, which grants a right to abortion until the fetus is viable outside the womb—usually around 24 weeks. A ban at 20 weeks means abortion could be illegal before a woman may get important information about her own health and the health of her pregnancy. While abortions after 20 weeks are uncommon, it is important that a woman and her doctor have every medical option available.

Far from enhancing health and safety for women and her family, HB2 harms public health by creating obstacles to obtain safe, legal, and accessible abortion services.

According to the UT study, which evaluates the impact of state laws on reproductive health, only seven counties would be left with abortion clinics, Travis, Bexar, Harris, Dallas, El Paso, Jefferson, and Nueces. With fewer clinics, lack of capacity could mean longer waits for appointments, pushing some procedures into the second trimester when health risks and costs increase. And according to the study, travel distances would be particularly burdensome to low-income women. The UT study said that more than 22,200 women would be hindered from obtaining an abortion in 2013.

Also in 2011, Texas politicians passed onerous requirements on women who make the complex, personal decision to have an abortion. She is forced to submit to a government-mandated ultrasound and receive state-scripted counseling designed to change her mind. Then she must wait 24 hours and return to the same health center before she can have the procedure, unless she lives more than 100 miles away.

In response to HB2, Planned Parenthood of Greater Texas, the Center for Reproductive Rights, and the American Civil Liberties Union, on behalf of several independent Texas abortion providers, filed a lawsuit in federal court in Austin.  Planned Parenthood v. Abbott contends that HB2 undermines the constitutionally protected right to a safe and legal abortion granted in the U.S. Supreme Court decision of Roe v. Wade in 1973. At the posting time of this press release, the suit is due to be taken up in January by the Fifth Circuit Court of Appeals where full arguments will be presented.

In an article in Politico magazine, Cecile Richards wrote, “What’s happening in Texas is happening all across the United States. Women in this country have had a constitutional right to abortion for more than 40 years. But over the last three, a small but vocal group of extreme politicians and conservative special interest groups has helped introduce, pass and sign a record number of bills to cut off women’s access to safe and legal abortion. Since 2010, more than 160 restrictions on abortion access have become law in 30 states—and more than 40 of these new restrictions have passed this year alone.”

In November of 2013, a number of U.S. Senators and Congressmen introduced the Women’s Health Protection Act, a federal law that would end state restrictions on access to abortion. However, political commentators say that while it has a strong chance of passing in the Democratic controlled Senate, odds in the House are nearly insurmountable at this time.

More about The Progressive Forum