Brian Greene Q&A on 'Until the End of Time' 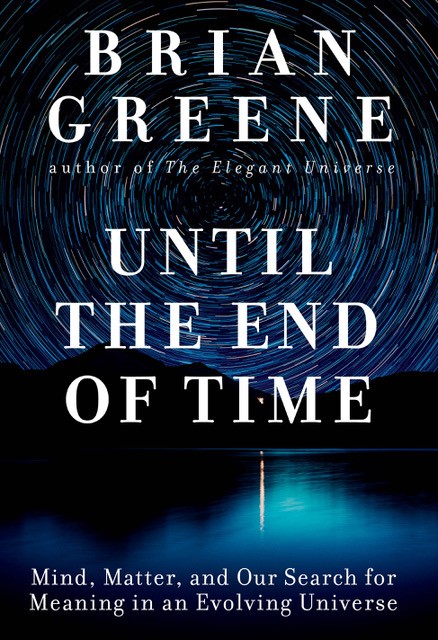 World-renowned theoretical physicist Brian Greene will discuss his latest book, Until the End of Time: Mind, Matter, and Our Search for Meaning in an Evolving Universe, in a free 30-minute livestream on Thursday, April 29, at 7:00 pm CT, with Progressive Forum president Randall Morton. Below is a preview into the book via a Q&A with Greene's publisher, Penguin Random House:

Give us a brief summary of your new book.

Until the End of Time tells the story of the universe from the big bang to the closest science can take us to the very end, and against this backdrop invites the reader to consider the human search for meaning and permanence.

Why have you set this human search within the unfolding of the entire cosmos?

The existence of life, and more particularly, conscious, thoughtful, self-reflective life is an astounding and wondrous quality of reality. All the same, I consider life and consciousness to be the result of the very same physical processes acting on the very same types of ingredients responsible for everything in the cosmos—shining stars to swirling galaxies. There is a beautiful continuity between the physical universe “out there” and the subjective universe of common experience. Understanding that continuity and grasping how life and consciousness fit on the cosmic timeline gives us an uncanny perspective. It is a perspective that allows us to feel a deep unity with a much larger, much older, and much grander reality.

With such a grand scope, what are some of the topics you write about?

The cosmological journey explores many of the scientific topics you might anticipate— the big bang, the emergence of galaxies, stars, and planets, the formation of complex atoms and molecules, and then on to the emergence of life. But a theme of the book is to consider these developments as part of a larger narrative arc—one that embraces the most iconic of human activities. And so the cosmological story leads us through the emergence of language, story, myth, religion, creative expression, and the very explorations of science itself. The unifying thread tying it all together is our common drive to find coherence in reality.

Why would you take on such a broad range of topics?

There is false divide that’s been set up between the humanities and the sciences. We are all in search of coherence and understanding. We may pursue the patterns of life and the cosmos in different ways, but the paths are all directed toward a deeper grasp of experience and reality. Many devote their lives to one or another approach; thankfully, such passionate and penetrating thinkers, artists, and scientists, push the boundaries of understanding clear across the world’s disciplines. My own focus for decades has been in mathematics, cosmology, and Einstein’s quest for a unified theory of all of nature’s forces. But the deepest insights come from approaching mysteries from a broad range of perspectives, combining realizations from many distinct explorations.

Do you see connections between your work in physics with these larger themes?

I do. Not in a direct day-to-day sense. When I’m doing calculations in quantum physics I am fully focused on the technical details. But the insights of modern physics— overturning previous conceptions of space, time, matter, energy, and reality itself— reframe discussions of life and death, of consciousness and free will, of duration and permanence. The poet and physicist speak a different language but care deeply about the same things. Though shaped by the rigors of science, my book aims to illuminate this common ground.

What can science possibly tell us about cultural undertakings, religion to art?

A lot. Science is not in the business of making aesthetic judgements or providing standards of creativity or beauty, of course. But we are all physical beings whose physiological and neurological makeup have evolved under Darwinian pressures. Researchers over the past few decades have explored the possibility that much as our upright gait and opposable thumbs evolved by virtue of the adaptive advantages they provided our forebears, there are aspects of our behavior that also evolved because they enhanced our chance of surviving and reproducing, and thus passing on these very behavioral tendencies. Our creative and cultural activities may have thus been shaped— directly or indirectly—by evolution.

In turn, do the humanities reflect back on your own work in science?
They do. Einstein famously said that “The most beautiful thing we can experience is the mysterious. It is the source of all true art and science.” There is no one who has said it better. My work for over three decades—seeking a deeper understanding of the big bang, nature’s forces, and the nature of physical reality—has been driven by an urge to experience the mysterious. And on rare occasions, some of those mysteries have resolved into breathtaking clarity. But it is only with art and the humanities that we gain the fullest, most visceral sense of both the wonders and the mysteries of life and experience.

How does religion fit into the story?

Many researchers over the years have imagined a close association between evolution and the emergence of the world’s religions. Some have suggested that religious belief— and the kinds of behaviors such beliefs entail—has direct evolutionary benefit. For instance, religious belief may bind us into stronger groups that are better able to respond to the difficult challenges our forebears faced in the Pleistocene. Other researchers have suggested that religion has no adaptive role of its own, but naturally emerges as a byproduct of other evolutionary adaptations, from having a big brain to having developed highly sensitive “agent detectors”—which are good for recognizing that you’re being stalked by a lion but often go overboard in sensing intelligent beings blowing in the wind or floating in the clouds. As a means of overlaying coherence on a broad spectrum of human perceptions and experiences, having a religious outlook is, according to these perspectives, not at all surprising.

It is interesting that the evolutionary perspective doesn’t need to weigh-in on that question. Something can be adaptively useful whether or not it is true. For me what’s more important are the evolutionary and cultural roles that religions have played and continue to play. For the storyline I develop in the book, religions are valuable not because they provide insight into the factual nature of the physical world but because of their role in human development.

In the book you also discuss creative expression. How does that fit in?

As with storytelling and religion, creative expression may have its own evolutionary role. The tight link between creativity, ingenuity, and innovation suggests that the arts may be closely associated with adaptively vital cognitive abilities. However, some have also suggested that the arts appeal to visual and auditory sensitivities that emerged through natural selection, but that artistic activities and experiences themselves have no intrinsic adaptive value. It is an ongoing discussion among researchers. My focus in the book is on the arts as a means we have used to find and communicate truths—human truths— that may resist direct expression through language. In the face of our own inevitable end, within a universe itself subject to long-term degradation and demise, story and religion and the arts are all a part of the human drive for something sublime.

As you look to the future, what lies in store?

The big unknown is the capacity of intelligent life to directly influence the development of the universe on galactic scales and beyond. We cannot predict what capacities life may acquire in this regard. Setting that unknown to the side and focusing instead on the laws of physics acting themselves out on cosmological scales, we can predict with some confidence what lies in store. We know that planets and stars and galaxies have long but finite lives. At some point, all planets will have been flung into the darkness or swallowed up by their host star. Stars will have burnt out or perhaps fallen into their galaxy’s central black hole. Black holes too will disintegrate, emitting a mist of particles that will waft through the darkness. As far as we can tell, all structures will, in the course of the enormous stretches of cosmological time, fall apart. In the end, entropy—the tendency toward disorder and decay—triumphs.

Not exactly a happy ending?

Some will surely find this conclusion dark, even distressing. I see it differently. Gaining clarity on the grand cosmic unfolding—start to finish—and understanding that life and mind likely occupy a tiny and fleeting oasis, helps focus the spotlight on the here and now. We are the product of impersonal laws that allow us to exist for a brief moment in the cosmic narrative. The wonder of it all lies in what we are able to accomplish in that brief moment. How spectacular that collections of particles governed by physical laws can love and grieve, yearn and aspire, ponder and explore—and through these qualities create everything from quantum mechanics to Beethoven’s ninth symphony. Even if our presence on the cosmic timeline is evanescent, we have used our moment to touch the transcendent.